In shocking news, the Washington Post reported last week that the Department of Homeland Security’s (DHS) Office of Intelligence and Analysis (I & A) had compiled “intelligence reports” on Mike Baker, a journalist at the New York Times and Benjamin Wittes, the editor-in-chief of the ‘Lawfare’ blog.

I & A ostensibly targeted Wittes for tweeting unclassified internal DHS memos containing detailed biographies of arrested protesters in Portland. The biographies were formatted in a way generally used to share intelligence on suspected terrorists. Mike Baker co-wrote an article for the Times that included an internal DHS memo detailing the department’s “lack [of] insight into the motives” of protesters, peaceful and otherwise.

Post reporting also revealed that I & A accessed protesters’ electronic messages and compiled similar reports on them, in direct contradiction of a Congressional briefing by Brian Murphy, the undersecretary for I & A at DHS.

The story’s publication was followed shortly by DHS’ acting secretary Chad Wolf ordering an investigation into the operations, the “immediate discontinu[ation of] collecting information involving members of the press," and the removal of Murphy from his position.

This latest controversy is particularly alarming because it involves the usage of a government system primarily used for surveillance of terrorists and terror-related activities to gather intelligence on journalists with no relation to terrorist activity, in a chilling subversion of their First Amendment rights.

I & A was never designed to conduct intelligence gathering to the same extent as other members of the intelligence community, like the FBI or the CIA. But Murphy’s tenure as I & A’s undersecretary saw an unprecedented expansion of its intelligence operations backed by vague legal pretexts. For instance, the Office justified its intelligence reports on the journalists by referencing cybersecurity concerns, even though such concerns are usually related to criminal hackers rather than journalists.

Furthermore, Murphy relabeled violent actors in Portland as “antifa anarchists” rather than "violent opportunists." This directly undermines previous DHS analysis which reported inconclusive evidence on the motivations and politics of violent protesters, and is just another example of the kind of self-contradictory and arguably bad faith intelligence analysis that plagues DHS.

Concerns about the DHS are not limited to its intelligence gathering and violations of the First Amendment rights of protesters and journalists. President Trump’s designation of Kevin McAleenan as acting secretary in April 2019, and his replacement by now-Acting Secretary Chad Wolf in November means that the department has operated under unconfirmed leadership for over a year. Wolf’s deputy, Ken Cucinelli, has still not had a confirmation hearing despite having been appointed in November. And before his removal, Brian Murphy was the acting under-secretary for Intelligence and Analysis.

Putting aside the dubious constitutionality of such appointments, officials who serve in an acting capacity for extended periods pose a real threat to government accountability. Given the breadth of responsibilities held by DHS, it is worrying that the Senate has not had the chance to fulfill its Constitutional responsibility to weigh in on a Secretary’s appointment. Additionally, Senate confirmation grants cabinet members the political capital to push back on executive overreach and act independently of the President.

Going back to the tenure of Kirstjen Nielsen, DHS has been beset by scandal. From the child separation policy to acting as the President’s “personal, private militia,” (according to Tom Ridge, the department’s first secretary) DHS has been involved in multiple egregious civil rights violations over the past three years. Congress and the American people must demand accountability at the Department of Homeland Security.

On Friday night, TikTok once again became the subject of controversy as President Donald Trump told reporters he planned to ban the app by executive order. However, when faced with pressure from his own party, Trump changed his position on Monday, saying that he would refrain from banning the app if Microsoft could negotiate an acquisition of TikTok’s North American and Australian operations within 45 days.

TikTok, a popular short-form video-sharing platform that emphasizes viral memes, lip-syncing, and dancing challenges, has been downloaded over 2 billion times. However, the app has sparked serious privacy-related concerns because of its predatory data practices and Chinese ownership. Officials are worried that TikTok’s Beijing-based parent company, ByteDance, is harvesting an alarming amount of user data and metadata from Americans. In accordance with Chinese laws, this data could then be acquired by Beijing for intelligence purposes.

Citing executive orders and broad economic powers, Trump claimed he has the authority to ban the app, but legal experts are less certain. Microsoft has also been working closely with the Trump administration and the Committee on Foreign Investment in the United States (CFIUS) as part of its possible acquisition of TikTok over the past several days. On Monday, Trump added that the U.S. “should get a very large percentage of that price. Because we're making it possible.”

Chinese laws require ByteDance to surrender information to the government if requested, including the TikTok user data of over 100 million Americans. This could include video history, user locations, preferences, app usage, and potentially, facial recognition data. The Department of Defense has already banned TikTok among its military personnel in December. And in June, the Indian government banned the app.

There is no proof as of yet that TikTok has released any data to the Chinese government. And a TikTok spokesperson said on Monday: "TikTok U.S. user data is stored in the U.S., with strict controls on employee access. […] We are committed to protecting our users' privacy and safety.”

However, the app has been plagued by privacy concerns for years. TikTok has been embroiled in court cases about its violations of minors’ privacy laws, the app has proven vulnerable to hacking, and scrutiny has also been leveled at its highly encrypted data-gathering protocols, which collect and hide far more information than other social media apps, including Facebook and Twitter.

Concerns from American lawmakers across the aisle are rooted in a justifiable mistrust of the Chinese government. Some of the most substantial hacks of Americans’ private data in the past few years have been attributed to China, including the 2017 Equifax hack and breaches of the U.S. Personnel Department and several American insurance companies.

2. If there are legitimate privacy concerns, what’s the problem with President Trump’s actions?

Trump’s threat to unilaterally ban the app in the U.S. through an executive order is probably illegal under U.S. law. Alternatively, the Trump administration could invoke the International Emergency Economic Powers Act or add TikTok to the Commerce Department’s list of foreign entities that threaten U.S. national security. These actions would also be legally dubious under the circumstances, as the proper legal thresholds may not have been met. They would also potentially pose threats to freedom of speech and expression. Notably, the app is home to strong anti-Trump voices, including comedian Sarah Cooper.

Additionally, the president’s involvement in Microsoft’s potential acquisition of TikTok presents serious issues. Last Friday, Trump seemed to nix the idea of Microsoft’s purchase, only to change course on Monday following a conversation with Microsoft CEO Satya Nadella. Microsoft has also stated that in accordance with Trump’s wishes, it is committed to “providing proper economic benefits to the United States, including the United States Treasury.”

Under CFIUS, the U.S. government can force ByteDance to divest for national security purposes, but the normally apolitical CFIUS has never before demanded a cut of the proceeds for the U.S. Treasury. Such a move would be highly unusual, and experts warn it could set a dangerous precedent for how business is conducted in the U.S. Using CFIUS to enable and even direct Microsoft to take over the lucrative platform resembles state-directed capitalism more than it does the free market. There are undoubtedly significant privacy and national security concerns with TikTok’s American operations, but we need to be sure that we’re addressing them through legal channels that are in accordance with democratic standards. 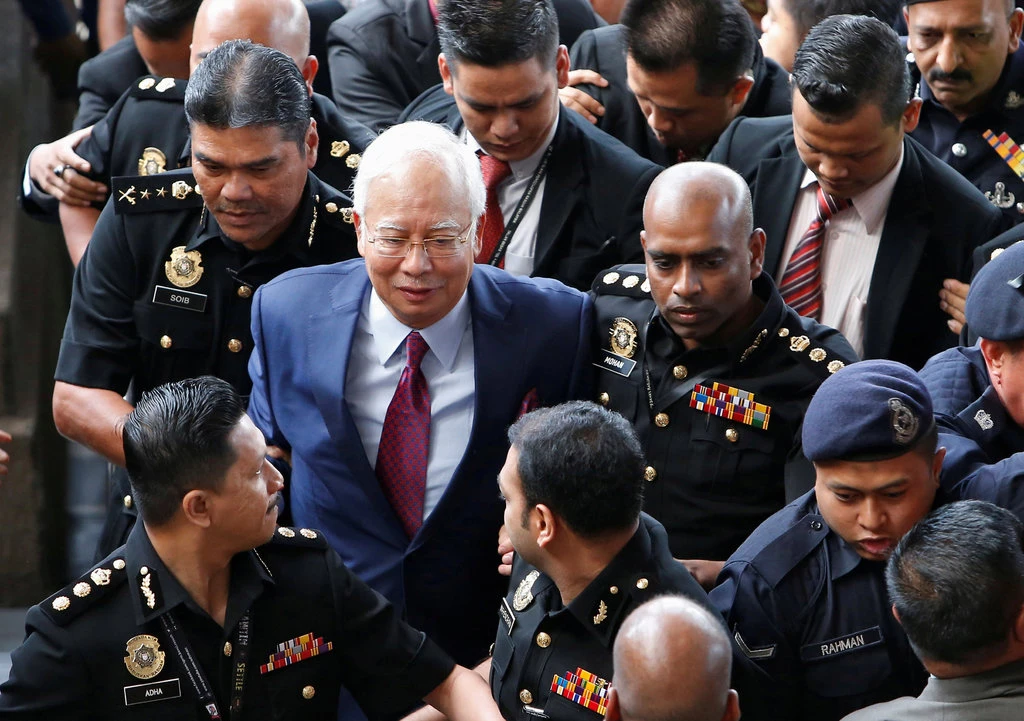 Last Tuesday, Najib Razak, the former prime minister of Malaysia, was sentenced to prison for 12 years and received a $50 million fine after being found guilty of money laundering and abuse of power, among other charges. The case was brought in connection to a corruption scandal two years ago that shook the financial world. Najib and government officials embezzled over half of the $8 billion raised by Malaysia’s state-owned investment fund, 1MDB. Further money laundering charges were brought against at least three Goldman Sachs employees, and a few days before Najib’s guilty verdict, Malaysia agreed on a $3.9 billion settlement with the firm. Razak’s trial is the first of five over money laundering charges related to the 1MDB scandal. While Razak maintains his innocence and has vowed to appeal the verdict, the ruling judge declared that the accusations had been proven beyond a reasonable doubt. Razak has been released on bail pending his appeal.

1. How has the 1MDB case affected Malaysia’s political landscape?

Najib Razak was elected as Malaysia’s prime minister in 2009 as part of the UMNO, the political party that has held power in Malaysia since the country’s independence. That same year he founded 1Malaysia Development BHD (1MDB), an investment company whose early initiatives included planning the creation of a new financial district in Kuala Lumpur, as well as multiple other China-backed development projects. Yet in 2015, the US Justice Department accused Najib of massive corruption linked to the fund. As the accusations mounted and Najib’s popularity declined, he accused the US of ‘imperial overreach’ and ran a re-election campaign based on nationalist rhetoric, including discrimination against Malaysia’s ethnic Chinese population. But shortly before the 2018 election, police raided many of his properties in the country and effectively placed him under house arrest. This was the nail in the coffin for his re-election hopes, and he was soundly defeated by the 92-year-old Mahathir Mohamad.

2. Does this ruling provide hope for the future of Malaysia’s democracy?

It certainly does, although the overall picture is complicated. While Najib’s ruling UMNO party was defeated for the first time in 60 years in the 2018 elections, his successor quickly resigned, and the UMNO has since returned to power in Malaysia. Democracy remains flawed in the country, and opposition parties have raised fears that political allies of Najib’s in the new government will try to overturn his conviction.

Yet despite these challenges, the Malaysian High Court’s ruling is a victory for the rule of law in Southeast Asia, a region known for sustaining autocratic power over democratic principles. Cambodia is facing a crackdown on political opposition, and the Philippines recently re-elected authoritarian leader Rodrigo Duterte. Najib’s guilty verdict shines as an example of a fair and just system of government in the midst of systemic authoritarianism that defines much of the region.