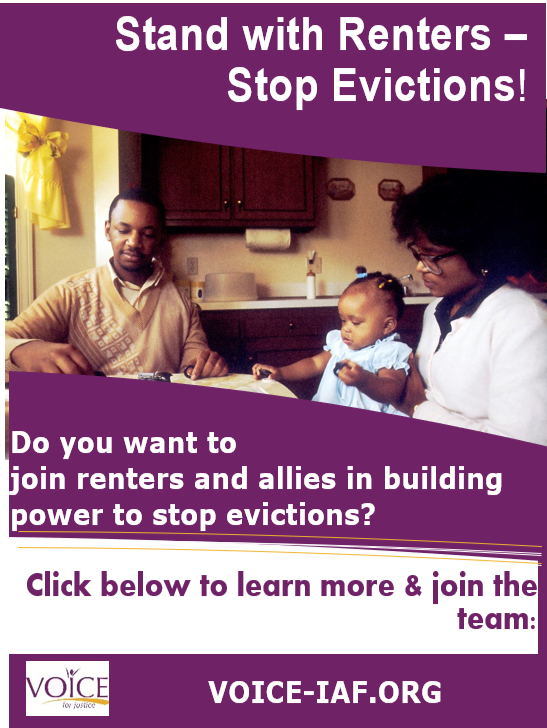 Next Steps - What Can You Do to Prevent Evictions?

To prevent eviction, we need to demonstrate enough POWER to create change. Here are some concrete steps you can take:

2-  Get others to Sign on too-- including other clergy, Bishops, small business owners, CEO’s, principals, etc.

3- Join VOICE in building relational power to prevent evictions. Attend a VOICE training to learn more about these issues and concrete actions you can take.  - 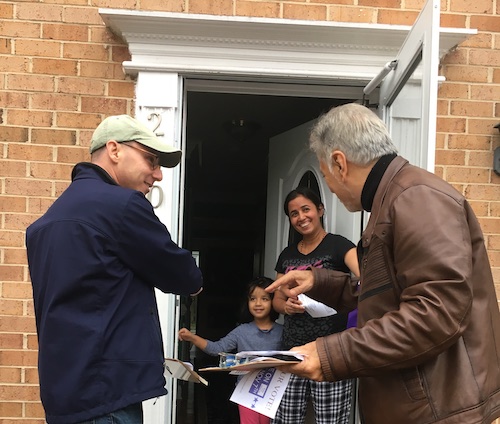 Governor,  just like the rent, bold action to address this eviction tsunami, is Past Due.

VOICE calls on Governor Northam to use his powers as outlined by Attorney General Herring to impose an eviction moratorium until at least the end of August or a special General Assembly session, whichever comes earlier, to ensure the estimated 550,000 mostly African American and Latinx families are not evicted.

To ensure these families are not removed from their homes, the  following standards must be met before eviction hearings proceed -

A) Federal protections under the CARES Act state that landlords in buildings with Freddie Mae or Freddie Mac loans may not be evicted through August. Currently, landlords with these loans are attempting to evict renters. Even worse, the renter is the person who must know and prove they are protected.

B) State protection under HB340. Currently, HB340 is being interpreted incorrectly by some District Judges which results  in some renters being evicted wrongfully. On April 22, 2020, the General Assembly passed as an emergency House Bill. House Bill 340 extends a right to a continuance of unlawful detainers to tenants“affected by” COVID-19 who are sued for nonpayment of rent due during the State of Emergency Due to COVID-19 declared by Executive Order 51 on March 12. Affected by means to experience a loss of income from a public or private source due COVID-19 and the ability to prove  (that she is not currently receiving wages or payments from a public or private source as a result of the State of Emergency).

At the beginning of the COVID outbreak VOICE conducted a listening campaign throughout our region to better understand how the pandemic was affecting our community.  VOICE had conversations with over 2,000 people, mainly parents in Title 1 schools, tenants living in affordable housing buildings, and members within VOICE’s own member institutions.

The number one issue that emerged was the fear of eviction.  Since that time, VOICE has sprung into action and achieved the following victories.