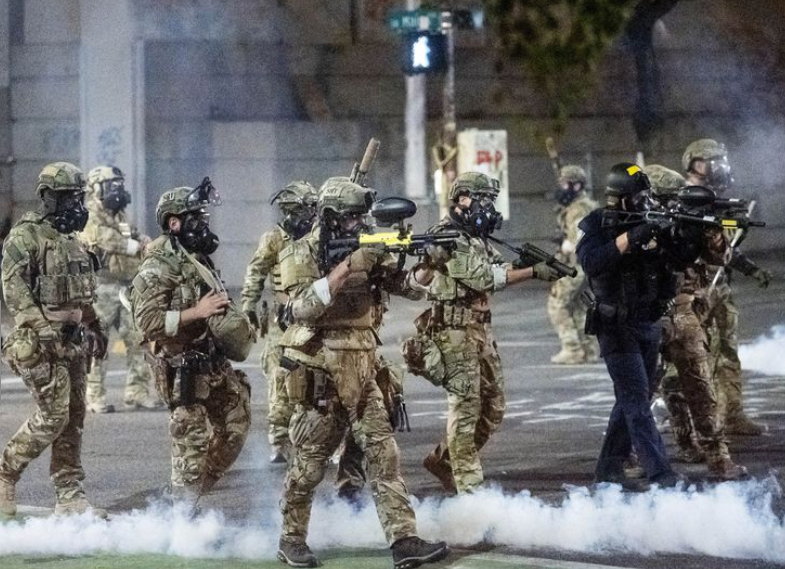 Disorder, confusion, and outrage mounted as videos surfaced of unidentifiable agents “grabbing individuals off the street,” and putting them into unmarked vehicles to be questioned and arrested. Another video featured a protester being shot in the head with an impact munition with both his hands up, sparking further outrage over the federal agents’ brutal policing tactics. Alongside local and state officials, Oregon Governor Kate Brown condemned DHS’s presence in Portland, stating “Trump troops are definitely not the answer… this only escalates the tension.”

On Monday, President Trump said the federal agents in Portland “have done a fantastic job,” and applauded how the agents “grab them [and] put them in jail.” He described protestors as “anarchists” who “hate our country” and pledged to send more agents to “New York, Chicago, Philadelphia, Detroit… Baltimore… and Oakland.” Meanwhile, US Attorney Billy J. Williams of Oregon called for an investigation into DHS’s response and Senator Jeff Merkeley tweeted that the “Trump/Barr tactics” are more representative of “authoritarian governments [than] democratic republics.”

Are these federal agents lawfully allowed to operate in Portland?

Federal law states that the Secretary of Homeland Security may designate employees to protect the federal government’s property, particularly to assist members of the Federal Protective Service. Those agents may carry firearms, make arrests, as well as conduct investigations even in areas outside the property, as long as those actions are related to the original aim. And in a statement late last week, Acting Secretary Wolf justified the federal government’s response with a list of federal properties that had been damaged in Portland since protests began. Yet, reliable reports of federal agents detaining peaceful protesters away from federal properties demonstrate that DHS is not operating pursuant to the law. At the very least, governmental officials must have probable cause of criminal activity when detaining and arresting a suspect. Making arrests without probable cause, on top of tear gassing unarmed citizens and beating non-violent protesters, jeopardizes both the 1st and 4th Amendment rights protecting the people of Portland.

Why is the DHS in Portland?

After struggling to use the military to quell nonviolent unrest around the country, the President may have found a more pliant organization in the form of the DHS, an agency with a leader who has not been confirmed by the Senate and therefore lacks the political capital and will to resist.

Since protests and riots broke out across America in response to the killing of George Floyd, President Trump has consistently tried to use state violence on American soil. At first, he threatened to invoke the Insurrection Act. Then under the direction of Secretary of Defense Esper, some National Guard units were activated in Washington DC, and military police were deployed near the White House. To facilitate his photo-op in front of Lafayette Square, federal officials fired tear gas and rubber bullets at unarmed protesters. And President Trump has tweeted that the military was on stand-by to quell civil unrest across America.

Like water snaking its way through cracks in the pavement, the President has sought out any possible opportunity to expand the power of the executive and to portray himself as a defender of “law and order.” 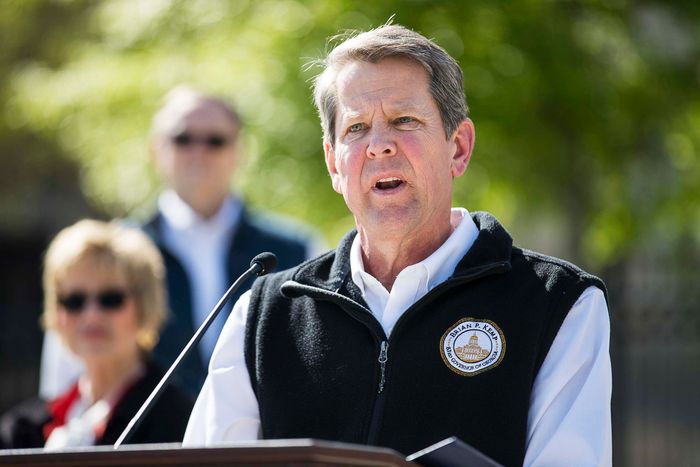 Despite Georgia’s coronavirus epidemic spiking to over 143,123 active cases and 3,176 deaths as of Monday, Georgia Governor Brian Kemp (R) filed a lawsuit challenging the authority of Atlanta Mayor Keisha Lance Bottoms (D) to issue COVID-19 related orders. These orders included mandates that masks be worn in public spaces and a transition back from Phase 2 - with non-essential travel and dine-in allowances - to Phase 1, where common areas are closed, non-essential travel is limited, and most stores operate as take-out only. The lawsuit came a day after Kemp issued an executive order banning local COVID-19-related restrictions throughout the state, which Bottoms and other mayors around Georgia, including Savannah Mayor Van Johnson (D), promptly defied. Bottoms welcomed the Governor’s challenge: “If being sued by the state is what it takes to save lives in Atlanta, then we will see them in court.”

But Kemp’s lawsuit didn’t focus solely on masking rules. Kemp also notably sought an injunction from the court to restrain Mayor Bottoms from “making statements to the press ... that she has authority to impose more or less restrictive measures than are ordered by Governor Kemp related to the Public Health Emergency.” Other Republican Governors like those from Alabama and Arkansas initially followed Georgia's lead blocking local mask mandates, although none went as far as attempting to limit another official’s speech. However, since the recent resurgence of cases in many Southern states, only Governor Kemp continues to oppose mandates, despite himself having urged Georgians to wear masks.

Will the Governor of Georgia’s lawsuit prevail in court?

Kemp’s attempt to prohibit Mayor Bottoms from exercising her free speech rights and issuing press releases will likely fail, as a clear violation of the First Amendment. As for her actual orders, the answer is far less clear. Many legal professionals believe that Kemp will win based on long-standing precedent. There are numerous state laws in Georgia that prevent local governments from doing anything inconsistent with the governor’s orders. However, Kemp’s specific executive order was built upon the emergency powers that grant him authority “to ensure COVID-19 remains controlled throughout this State.” Therefore, according to Georgia State University College of Law professor Clark Cunningham, Kemp may need to show that “preventing the mayor from requiring the wearing of masks ensures that COVID-19 remains controlled.” It’s difficult to see how blocking the very policies most essential for stemming the virus will ensure that it remains controlled.

What does Governor Kemp’s lawsuit say about our democracy?

Kemp’s lawsuit is a prime example of the highly polarized environment in America today, in which even wearing a mask and following basic CDC protocols has become a political issue. Governor Kemp, who himself has urged his fellow Georgians to wear a mask, stated last month: “There’s some people that just do not want to wear a mask. I’m sensitive to that from a political environment of having people buy into that and creating other issues out there.” So, while the Governor believes in the efficacy of mask wearing, he doesn’t think it is politically tenable. But why is it so politically untenable? From Fox News to the Oval Office, whether it’s the media or the seat of government, the American people have been lied to about the importance of wearing a mask. Indeed, poll numbers show that a deep political wedge has already been driven; according to a recent Gallup Poll, Republicans are three times less likely to report always wearing a mask outside the home compared to Democrats. And unfortunately, some Republican leaders that have mandated masks, like Texas Governor Greg Abott, have faced backlash from their party as a result. A public health measure necessary for saving the country from being ravaged by the virus has been made into a political issue.

Hope for Democracy in Suriname as Longtime Leader Ousted

You may or may not have heard of it, but on July 13th, the Republic of Suriname’s leadership officially changed hands in a watershed moment for the small South American democracy. Two months after Chan Santokhi’s Progressive Reform Party’s landslide general election victory, Suriname’s National Assembly elected him to the presidency, ousting longtime ruler Dési Bouterse.

Bouterse began his rule over Suriname after coming to power in a 1981 military coup, establishing a de facto military dictatorship, and committing innumerable human rights violations, such as the 1982 murder of 15 critics of his regime. The military dictatorship was relatively short-lived, coming to an end after a civil war and weak electoral performances. Suriname underwent a transition to democracy, holding regular elections through the final decade of the 20th century and into the 21st. Ultimately, it elected the former dictator in 2010, empowering him to strengthen the executive, weaken governmental transparency, and interfere in criminal investigations relating to his human rights offenses in the 1980s.

Enter Chan Santokhi. No stranger to Bouterse’s malfeasance, Santokhi served as the lead investigator in charge of serving justice to the perpetrators of the 1982 murders. Santokhi and Bouterse have an electoral history, too, with the former taking an ill-fated stand against the latter in 2010. Now, however, the tables have turned: Santokhi’s party won 20 of the National Assembly’s 51 seats in its best showing since 1973, forming a coalition with three other parties to claim a majority of seats and oust Bouterse.

Suriname is not home free just yet, however. Bouterse remains well-connected within the Surinamese military, with a large fortune and a sizable cult of personality. Bouterse’s influence won’t be the only hurdle—Santokhi comes to power at a tumultuous time, facing a global pandemic, an accompanying drop in oil prices, and a rapid currency devaluation threatening Suriname’s economic stability.

Yet these obstacles are by no means insurmountable. Suriname’s long-term economic outlook is positive: it has made significant offshore oil discoveries over the past two years which are likely to boost economic growth (assuming Suriname doesn't become over-reliant on oil). Finally, current challenges notwithstanding, there is always cause for celebration in the deposition of a corrupt once and would-be autocrat and a return to democratic governance.

What does Santokhi’s victory mean for America and the West?

Santokhi’s presidency will likely be a boon for American interests in South America. During Bouterse’s 1980-1991 military dictatorship and his 2010-2020 presidential term, Suriname’s foreign policy favored alliances with anti-American bad actors and authoritarians around the globe. In particular, Bouterse endorsed Chinese expansionism and its crimes against its Uyghur population, in exchange for generous aid in the form of, among other things, military assistance, housing construction, and an upgrade of the Surinamese state television network. Bouterse also formed close relationships with Venezuela and Cuba - so close, in fact, that Bouterse reportedly received financial backing from Hugo Chavez, Venezuela’s erstwhile dictator, during his presidential campaigns. The election of Santokhi’s government may signal a reversal of this trend, and a possible reorientation towards the Netherlands, the United States, and the West more generally.

More symbolically, the removal of Suriname’s on-again off-again authoritarian ruler, is a sign that the apparently inexorable spread of authoritarianism and the deconsolidation of democracies such as Hungary, Poland, Turkey, Venezuela, and others, is not unstoppable. The future looks bright for democracy in Suriname as it joins the ranks of countries like Sudan and Malawi as living proof that the ideals of freedom and self-determination are not things of the past, particularly in the developing world.